OK I really didn’t have a very solid idea of where the raised beds will go and what would i be planting in them when i dug the first hole. But once you stare at something long enough, imagination becomes plausible ideas and they slowly take root in the dusty patch. I had previously mentioned that I had a 3 week hiatus from toiling the land. Besides zapping kikuyu heads and other weedy stuff that were sprouting out, there was little else but to sit tight, keep the little one occupied during her summer school break and think think think.

So after the nth iteration and consultations with gardening enthusiasts on facebook, this was to be the final layout of the vege garden.  The priority is to provide a spacious, inviting look to the garden. Since I had no prior gardening experience (dont think spring onions in pots count for much), i decided to design the space first…maximising the full sun I’d get almost year round by orientating the beds in a N-S direction, and making sure that the measurements work out to allow walking and working spaces within. 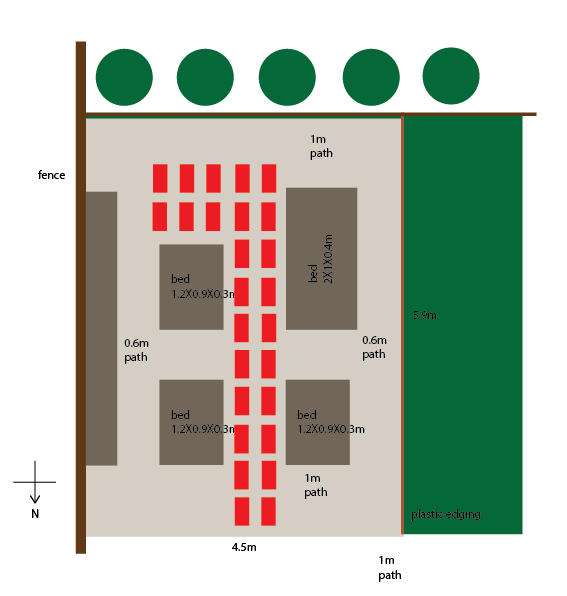 Calculated decisions – what raw material are required for the garden

The candid Bunnings staff also advised to have a layer of garden lime spread over the areas where the beds will be placed. Since these areas will not have a physical barrier between the ground and the veg soil that goes on top, it’s imperative to make sure that all remaining roots of the weed are ‘burnt out’ by the application of the lime.